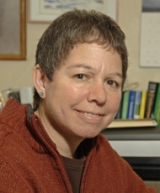 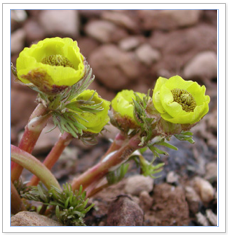 My research program explores the mechanisms and processes of evolution in wild plant populations. Over the past decade I have drawn on a diverse group of flowering plants to study the ecological and evolutionary consequences of variation in life history traits and reproductive characters. I am currently involved in two major projects continuing this line of research. The first addresses how conflicting selection pressures shape the evolution of floral traits within natural populations of alpine Polemonium viscosum (skypilot). This project represents an integrated study of the genetics, ecology, ecophysiology and evolution of flower size and form.

A second interest concerns the physiological and genetic basis of solar tracking or flower heliotropism using the snow buttercup, Ranunculus adoneus, as a model system. This research, conducted in collaboration with the Liscum lab, addresses the genetic relationship between solar tracking in flowers and phototropism in seedlings. The ultimate goal is to determine whether the two processes are genetically correlated and/or controlled by members of the same gene family. If so, selection on one process might influence the evolution of the other in natural populations. Molecular and quantitative genetic approaches are being used to explore this hypothesis.

In answering evolutionary questions, evidence from many levels of biological organization is helpful. Work in my lab draws on populational, organismal and physiological observations to measure plant performance and natural selection. The synthesis of ecological and genetic approaches adopted in these studies offers insights into the mechanisms and tempo of microevolutionary events. Knowledge gained in this domain also has applied value. Our efforts to conserve native flora depend ultimately on our knowledge of their potential to adapt to new environmental challenges. Our ability to grow crops sustainably depends on an understanding of the physiological and morphological modifications that allow plant species to grow and reproduce under stressful ecological conditions. Insights into both kinds of questions may be found by studying the ecological genetics of native flora in natural environments.

McCaffrey J, and Galen C. Between a rock and a hard place: Impact of nest selection behavior on the altitudinal range of an alpine ant, Formica neorufibarbis. Environmental Entomology 2011;40(3):534-540.

Galen C and Geib JC. Conditions for evolution in a pollination mutualism: density dependent effects of nectar-thieving ants on selection for bumblebee pollination in the alpine wildflower, Polemonium viscosum. Ecology 2007;88(5):1202–09.