The 26th Annual Interdisciplinary Plant Group Symposium took place on May 27-29, 2009, on the Columbia campus of the University of Missouri in the Christopher S. Bond Life Sciences Center.

The focus of the 2009 symposium was on root biology. Root development and function are vitally important for plant adaptation to the environment. Understanding of root biology remains limited, however, and increased attention to this critical area is needed to facilitate improvement of crop performance, especially in the face of environmental constraints. This symposium brought together nineteen of the world's leading scientists to address recent advances in studies of root development and root interactions with the abiotic and biotic environment. (Schedule)

The Interdisciplinary Plant Group would like to thank the following sponsors and exhibitors, without whose generous support the 26th Annual IPG Symposium would have not been possible.

The winner of the Biochemical Journal's Young Investigator Poster Award at the 26th Annual University of Missouri Interdisciplinary Plant Group Symposium was Robert Kumpf, Department of Molecular Biosciences, IMBV, University of Oslo, Norway, for his poster, “Expression studies and overexpression phenotypes indicate a role in Arabidopsis root development for the IDA-LIKE peptides." 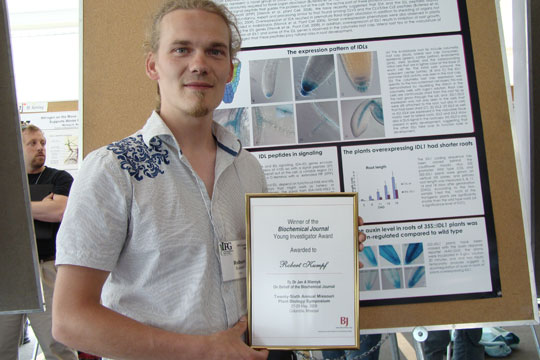