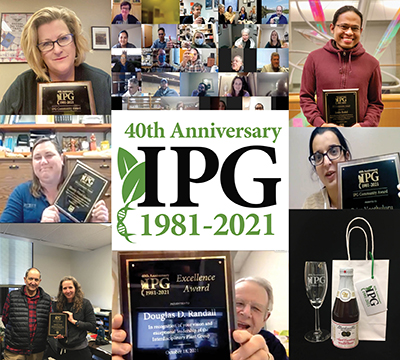 In 2021 the IPG celebrated it’s 40th Anniversary. To mark the occasion, a series of seminar’s featuring IPG alumni, one from each decade of the IPG, as well as two additional seminars from recent IPG alumni (more details on the seminar series can be found here).

During the final seminar of the semester, IPG members joined in for a virtual toast to 40 years of the IPG’s success.

Those presented with awards were:

Jennifer Hartwick (Senior Conference Coordinator, MU Conference Services) was awarded the IPG Community Award on October 25. Jenn was recognized for her contributions to the IPG, and the broader plant community, through her efforts organizing many conferences, trainings, and workshops, including the annual IPG symposium since the late 1990’s!

Janlo Robil, doctoral student in Dr. Paula McSteen’s lab, was awarded the IPG Community Award on November 8th. Janlo was recognized for his contributions to the IPG through his efforts in using his outstanding design skills to create logos for IPG meetings and other MU activities and organizations.

Melody Kroll, Communications Consultant, Division of Biological Sciences, was awarded the IPG Community Award on November 15th. Melody was recognized for her many contributions to the IPG while serving as IPG coordinator with Dr. Doug Randall and Dr. John Walker and her continued efforts promoting plant biology on campus in her current role.

Dr. Priya Voothuluru, Research Scientist in the Center for Renewable Carbon at the University of Tennessee, Knoxville, was awarded the IPG Community Award on November 29th. Priya was the originator of Plant Talks, IPG’s highly successful student and postdoc seminar series, in 2008. She also served as the IPG Graduate Student Representative on the IPG Executive Committee from 2007 – 2008 and was a member of the IPG symposium organizing committee in 2012. Priya received her PhD in 2012 with Dr. Bob Sharp and continued at MU as a Postdoctoral Fellow from 2012 – 2015 with Dr. Scott Peck and Dr. Sharp and then as a Research Scientist with Dr. John Boyer from 2015 – 2017.