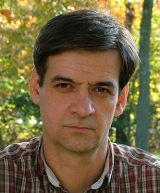 My lab is interested in the interaction between grapevine (Vitis vinifera L.) and its powdery mildew pathogen Erysiphe necator Schwein. In addition to being an intriguing biological phenomenon, this parasitic interaction is of great economic importance. Although E. necator can be effectively controlled by a range of fungicides, these chemicals can harm the environment, pose risk to human health, and/or become ineffective by the pathogen's ability to develop fungicide resistance. Dependence on chemical-based disease control can be alleviated by the cultivation of grape varieties that are innately resistant to the pathogen. My lab is working toward this goal by studying the interaction between E. necator and V. vinifera in both a compatible and incompatible interaction.

Recently, my lab has begun studies on V. vinifera varieties that have partial but economically significant resistance to powdery mildew. These varieties, originally from Central Asia, offer resistance against the pathogen after it has successfully penetrated grapevine epidermal cells. This trait is controlled by the dominant gene REN1, a novel resistance gene that is located on chromosome 13 and that is different from R genes previously found in wild North American Vitis species. Current efforts, led by my colleagues at the University of Udine, are being made to fine-map the location of REN1 and to clone it from the grapevine genome. The microsatellite markers generated for REN1 mapping can also be used to introgress the locus into hybrid grapevines using marker-assisted selection. This breeding method will enable us to combine REN1 with several other resistance genes that direct different defense mechanisms to fend off the powdery mildew disease. This approach, referred to as gene pyramiding, leads to hybrid grapes with durable resistance against powdery mildew. REN1 is particularly valuable for breeding because it is from a V. vinifera genotype, and its introduction to cultivated grapes will not result in linkage drag of undesired non-vinifera characteristics.

To better understand grapevine's susceptibility to powdery mildew, my lab also studies powdery mildew induced changes at the level of the entire transcriptome in the V. vinifera cultivar Cabernet Sauvignon. Despite the susceptibility interaction, we detected a major defense-related restructuring of the transcriptome upon powdery mildew inoculation. These changes were associated with an increase in salicylic acid (SA) levels, suggesting that a SA-mediated signal transduction system was activated. To determine if other signal transduction pathways were also activated, we performed comparative microarray studies in both SA and powdery mildew treated grapevines. We found many genes that were up- or down-regulated in response to powdery mildew but not SA treatment. We are currently studying the promoter of one of the genes that encodes an NAC-type transcription factor.